Kufstein Merchants can look back on a very colourful past since the establishment in 1971.

Hermann Schick, one of the founders of the Advertising Community Kufstein remembers:

It was 1964 when the merchants of Kufstein decided to get together to follow the role model of the Linz merchants. Back then it was not a registered association but rather a loose union.
When the Kufstein Merchants was founded as an association, almost all merchants in town were full of enthusiasm. The first board members were Karl Mayr, Edi Neumayer, Helmuth Zanier, Herbert Felbermauer and Kurt Kiechl.

Hermann Schickh was the chairman of this association until April 1979 and was followed by Kurt Kiechl. The major aim of the advertising community during times of economic growth was the creation of customer loyalty through various campaigns, and therefore the reduction of local purchasing power outflow towards southern Bavarian due to the difference in economic zoning (EFTA & EEC).

In November 1970, six years later, the first issue of the well-know “Kufstein Aktuell” paper was printed. The publisher was the advertising community Kufstein and it was edited by Arnold Reicher, who was the chief editor from 1972 until 1980. “Kufstein Aktuell” was a free local paper with 28,000 copies. It contained information about politics and daily life in Kufstein and the surrounding villages of the Kitzbühel district. It also became an important means of advertising for all members of the advertising community. Hermann Schickh was responsible for the monthly paper until 1979, when it was taken over by Kurt Kiechl. This handover also resulted in significant changes to the layout.

A yearly highlight was the Christmas lottery, which was created based on the role model of Linz in 1964. It was a success from the very first time. The raffle took place under legal supervision of Dr. Hammerla. A spectacular lottery took place in 1975, when the prizes were trips to Mombasa in Kenya, Hong Kong or the Gulf of Thailand with a total value of €300,000.00.

Five Olympic snowmen (1976 Innsbruck winter Olympics mascots) walked around town advertising the raffle. There has been Christmas lightning in Kufstein since 1968, with the lighting itself and the setup financed by donations of Kufstein’s merchants.

Kurt Kiechl came up with the idea a visit by St. Nicholas in 1975. From that first time on there has always been a huge audience when St. Nicholas gives away sweets, candies and little gifts. That year was also the first time that a Christmas market was held (see pictures below).

At the end of 1970s, Kufstein and its merchants were the first to open all shops on the 8 December. In 1979, the regional administration threatened penalties of 1.5 million schillings if the stores opened on 8 December again the following year. However, the fact that Wörgl also liked the idea of opening shops on 8 December, the threat and penalties have never been imposed.

Hermann Schickh in an interview:
“The 40-year anniversary of the Kufstein Merchants proves that this action has been significant for the long-term competitiveness of our small city.” 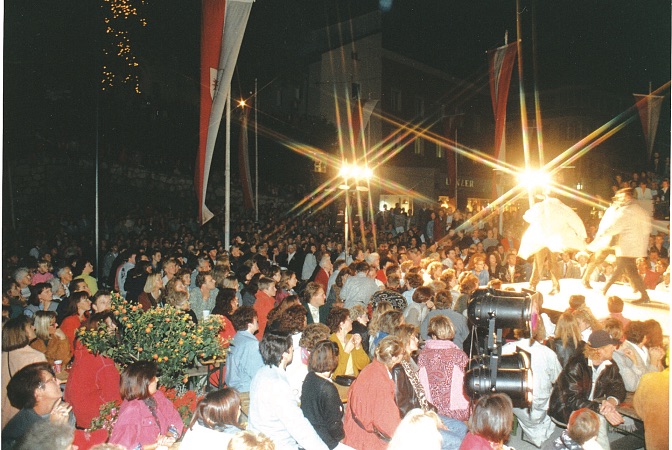 Getting more and more professional

From the first moment on, the cooperation among the “most important” local companies was in the centre of attention. Over the years, the activities became more increasingly professional. In 1991, Joachim Bullermann, back than a well-known character in the area of city marketing in the German speaking countries, presented the relevance of this topic. Christian Klotz, an expert on city advertising, supported this speech in 1992. From then on, the mission of the Kufstein merchants adapted towards the tasks of city marketing. The Kufstein merchants knew about the potential and significance of a city marketing plan. As early as 1992, the first “city marketing concept” was presented. Some aspects were realized in cooperation with the city of Kufstein and the DMO. Particularly exciting events such as the kids city festival, flower Saturday, handicraft market or an open-air fashion show were the focus of attention. The Kufstein ducats were introduced in 1993, and have continued to be a huge success.

As time went on, the Kufstein merchants organized more and more events and highlights. At some point a “round table” was introduced and strengthened the cooperation “Lust auf Kufstein” with the city council, DMO and Kufstein merchants when it came to special events. People now think back to the ice rink at the city park as part of the carnival procession. Other introductions were the summer and wine festival in July as well as the Christmas market in the city park.

In May 2004, the first night shopping event took place. Since then, every year at least one night shopping has been successfully held. Being present has been the aim of the Kufstein merchants for many years. A website was therefore set up and numerous announcements are made throughout the year. From 2007 on, a CEO consults the Kufstein merchants in order to ensure the quality and success of all initiatives.

Finally in 2017, a professional city marketing association was founded. From 2015, its predecessor was the “top-city-Kufstein.” Budget administration and numerous responsibilities were handed over to city marketing. They started a rebranding initiative for the city in cooperation with the DMO that has been highly successful.

Logos of the Kufstein merchants throughout the years